Coming into Fashion: A Century of Photography at Condé Nast


When a colossal conglomerate like Condé Nast gives an author unprecedented access to their century-old archive, prodigious results are bound to happen. That’s what we have in Prestel’s book, Coming into Fashion: A Century of Photography at Condé Nast. Nathalie Herschdorfer had to be pinching herself sapphire during the process. What a dream to have nearly 300 pages to fill from rooms full of images by the world’s most illustrious fashion photographers.

There must have been overwhelming moments, too. But Herschdorfer stays true to the premise of writing a book about fashion photographers as artists and she selects images that are more about the approach than the trend depicted. She concentrates on how the field developed and how careers were launched. We also find out how Nast went about surrounding himself with talent and using his influences on the publishing world. It’s wild to imagine that when he acquired Vogue in 1909, the circulation was a mere 14,000 copies per month!

Coming into Fashion is organized in four major sections. In “The Beginnings: 1911-1939,” Edward Steichen defines High Society by depicting sophisticated a woman from the shoulders up, letting light catch on a simple strand of pearls and the tips of a silver fox wrap. He also cleverly sets a hand model sliding Ma Jong tiles across a board; the emphasis is on her ring and three stunning bracelets perfectly set on her arms.

Composition dominates the next part, “The Golden Age: 1940-1959.” Here we find Erwin Blumenfeld charting new ground. He spends eleven years at Vogue, experimenting with multiple exposures and colored filters. Diane Arbus takes the idea of photography concept into the magazine’s pages by staging scenes of a fashion shoot itself.

Through “The New Wave: 1960-1979” and “Recognition and Renewal: 1980-2011,” the book goes on to discuss and rediscover the work of this genre’s leaders. Helmut Newton’s trademark subversive style, Deborah Turbeville’s method of shooting her models in controversial poses, Paolo Roversi and Mario Testino’s approach to the model as the fashion itself plus a new generation of artists who are making their mark are just a few of the many photographers profiled in this excellent volume.
Posted by Jain Lemos at 2:34 PM No comments:

Labels: Coming into Fashion: A Century of Photography at Condé Nast, Nathalie Herschdorfer

War Before the Camera Lens

On the 150th anniversary of America’s darkest internal conflict, we are hauntingly reminded of our nation’s violent past through the eyewitness illustrations in Civil War Sketch Book: Drawings from the Battlefront. These brave draftsmen—known as Special Artists—revolutionized the field of combat documentation and set standards for future war photographers.

Two Specials, brothers Alf and William Waud, were Englishmen, and supposed to be neutral to either side. They were hired by publisher and fellow-illustrator Frank Leslie to contribute for his Illustrated Newspaper, a Northern Virginia frontline publication, who clearly stood with the South. Alf Waud describes battles as horrific sights, often sketching dead and dying men and horses, “in every conceivable position.” We might be grateful that these journalists didn’t have today’s high-res/high-definition equipment.

In Joseph E. Taylor’s 1864 image, “Sheridan’s Campaign,” depicting an incident at the Battle of Winchester, we see a dedicated hound protecting his slain rebel master. He stands alert with his front paws on the chest of his fallen comrade. They are sketched below a grove of large and graceful trees, with other dead lying in the silent distance. It is hard to grasp how one could have taken out pen and paper to record such a moment without collapsing into tears.

The publisher has done an exemplary job in reproducing these gems. But the drawings are not crispy. Instead, they are sad and wispy. Clouds in the sky and swirling dust are from quick and shaky hands. Beyond the gore, the Specials captured the serenity and beauty of many of the areas they covered. Plates depicting political gatherings and local architecture are presented with confidence and pride. This expanded reporting created bodies of work that allowed many of the Specials to land permanent positions with prominent publications of the day.

This rich collection of special images, spanning 1861 through 1865, truly documents the start of pictorial journalism. Katz, the former head curator of the Library of Congress, and the prolific picture book author Virga, have teamed together to build a must-have book for any noted American history collection.
Posted by Jain Lemos at 2:28 PM No comments:

In Time, All is Revealed 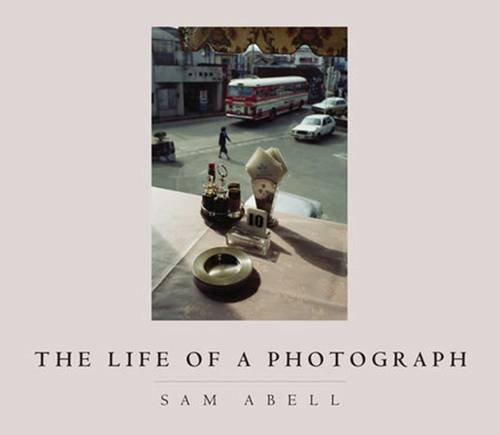 The Life of a Photograph by Sam Abell

Sam Abell’s purpose permeates all the way through the weighty pages of his latest book, The Life of a Photograph. Abell provides an important insight to his success: He instinctively and deliberately makes photographs, he does not take them. Abell’s definition of the life of a photograph is all about the progression of a scene. He has trained himself so deeply in this practice that at the end of the day, individual images matter less than staying true to his formula for making them.

The Life of a Photograph is a career technique book. The theme is to continually illustrate Abell’s stance that once he finds the setting of his desire, the picture will come. The book does not follow a structured outline in terms of place, storyline or chronology; instead, there are many parings made at the same setting. This device contributes to the sensation of actually being Abell as he waits. Sometimes the waiting feels anxious and other times, divine. Abell explains his modus operandi with observant, and sometimes modest, words. Strapped to find inspiration in the Amazon, he decides to approach the area as a garden leading to stirring results. He writes the shots were, “done with an appreciation of how, one day, they might be seen.”

There are terrific comparison exercises presented in The Life of a Photograph. For example, when faced with two views of a cab in a Santorni street scene, do you choose the image on the left that includes a towering bust of a historical figure or the frame on the right where the roof of the taxi appears like a fresh sheet of ice? Out of four shots taken from a Japanese bullet train window, are the photographs where Mt. Fuji is captured intact superior to one with the mountain obscured by a steel structure? The book provides a semester of such discussions.

Not all of the images in The Life of a Photograph are remarkable. Many are knock-your-socks-off shots of a lifetime. With this assemblage, Abell reveals his signature approach to photography where the photographer is eventually discerned and connected to every image forever. Abell admits this is not easy, even after forty years in the field. In all, the book is a testament to the fact that photography is extremely hard work. The Life of a Photograph is a treasure map that Abell graciously hands over to those ready for the hunt.
Posted by Jain Lemos at 8:25 AM No comments:

Labels: Sam Abell: Book Review, The Life of a Photograph

Windows of the Soul: My Journeys in the Muslim World

Windows of the Soul: My Journeys in the Muslim World is the first title released in National Geographic Books’ new imprint, Focal Point. In accord with Focal Point’s mission to, “draw on the most outstanding photography of today’s journalistic elite,” Alexandra Avakian’s memoir is exceptionally influential. Avakian’s enviable assignments from leading journals spanning twenty years resulted in a massive body of work. Her 150 selections for this book reflect an exclusively personal and brave assemblage of Muslim life.

Windows of the Soul is divided into sections on The Palestinians, Iran, Central Asia and the Caucasus, Somalia and the Sudan, America and Hezbollah. The chapters are a mix of news stories, discoveries, atrocities and realities of a way of life. The images were often taken at much risk to Avakian’s safety and health. In Gaza, she spent two years in Islamic clothing—blending in to gain trust and access—but the cost included being beaten by Hamas and shot at by Israeli troops. Her infiltration into Hezbollah was unprecedented and her depiction of their daily life is oddly still. As she photographs Muslims in America, the images become more saturated, lively and divergent as she documents Arab festivals in Michigan, a baptism in Texas and a Persian New Year celebration on the beach in California.

Like her photographs, Avakian’s narrative in Windows of the Soul is clear-cut and poetically composed. The text is a private accounting yet she provides readers with more than just an insider’s view of life in regions that mystify many outside of their world. In Iran, an image of masked women sipping sodas at a market is shot intrusively but their masks and head coverings create a separateness of subject and shooter. Avakian explains that she couldn’t resist trying on a mask herself: “The most disconcerting thing…was having my vision strictly divided between left and right….” Following gunfire in Gaza, Avakian stumbles upon, “a Palestinian teenager dying in the dregs of the alley’s sewage.” Her photo is largely flanked on the left foreground by a soldier with his weapon ready, creating a type of crude barrier over the stricken teen.

The degree to which Windows of the Soul works to turn around the ignorance of the many political and social issues facing Muslims is significantly high. All too often the media diverts attention away from matters of real importance; Avakian’s efforts to the contrary with this subject matter deserve recognition and reward. Even if the Muslim world remains chiefly impenetrable to outsiders despite attempts to change that through dialogue and photojournalism, Avakian is to be admired for sharing without hesitation the amazing insider details of the mindset and methodology rooted in her work.
Posted by Jain Lemos at 3:29 PM No comments:

Jain Lemos
I'm a small town girl with a big town heart and soul. I spent my summers at a river camp in the redwoods, reading stacks of books, building forts and overcoming fears.